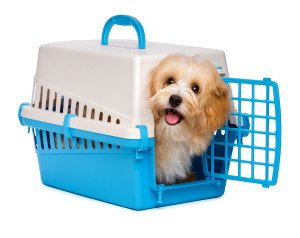 There are many reasons why we recommend using a crate in puppy training, but it must be done correctly in order to be effective. Incorrect use of a crate can be counterproductive at best and cruel at worst.

Crate training keeps your puppy — and your belongings — safe and allows you to control the puppy during times when you can’t pay attention to everything the puppy is doing. This helps all other aspects of training, but particularly housebreaking.

It helps that, in the wild, dogs are den dwellers. They like a space big enough to turn around and curl up for sleep, and it’s useful to know that den dwellers won’t usually soil in their sleeping area unless there is no other choice. So if your pup is well exercised and had time to use the bathroom outside, the crate can become a welcome spot — his or her own “den” in the house.

Toward this end, we recommend: providing some sort of chew toy such as a Kong for distraction, keeping the crate near you when the dog is crated and you are home (but interacting as little as possible), feeding in the crate, providing a soft bed once the dog is housebroken, providing an item that has a family member’s scent on it and hiding treats in the crate.

It’s also important to crate your dog for short periods during times when you are home so that the dog doesn’t associate the crate with your departure.

Follow these guidelines and, over time, the dog will see the crate as a welcome spot.
In fact, most crated dogs sleep in their crate even with the door open.

The most important thing to remember is that the crate cannot be used for punishment and that you, as the one in control, must be aware of your dog’s needs, even to the point of anticipating them, to avoid accidents and misuse of the crate.

Here are some helpful tips for using a crate: